Skip to content
HomeAre the variant readings of the Qur’an caused by the lack of dots in the Uthmanic Qur’an?

It is a well known phenomenon among scholarship, both Muslim and non-Muslim, that the Qur’an today contains several well recognized variants in the text itself. For example, in Surah Baqarah, Ayah 85, we see a difference in the last word between the “Qaloon” reading and the “Khalaf” reading [1]. 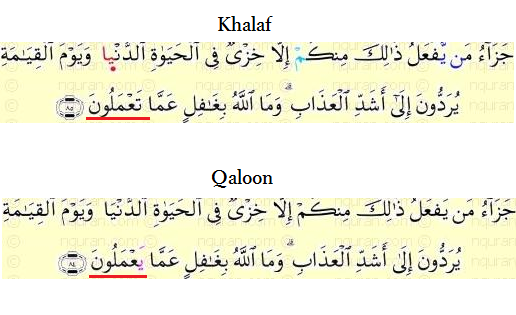 There are many more examples to be found if we compare the well known readings of the Qur’an. These readings are known as the “Qira’at“. The Qira’at are divinely inspired differences in the possible readings of the Qur’an. The historical development of these readings is not the subject of this article, though perhaps a future article will be written to cover that topic, as more knowledge of this will help one get a better grasp over the contention being refuted here. For now, it is sufficient to know that the Prophet Muhammad (ص‎) had, through the command of God (س), read the Qur’an to different companions with minor word variations between them, in order to better facilitate the dispersion of the Holy Book between the arab tribes, to avoid any difficulties in recitation because of the fact that their dialect of arabic differed from that of the Quraysh [2].

For a Qira’at of the Qur’an to be accepted, in must fulfill the following criteria [3]:

The ten “mutawaatir” readings of the Qur’an are the most well known of the Qira’at, and by consensus of the Muslim community, each are valid and each represent the Qur’anic text.

The differences between the Qira’at encompass from pronunciations of certain words to the usage of different words with different roots altogether in the verse. Sometimes, the differences are meaningful, and change the apparent meaning of the verse that contains such a variant. Now, as we’ve gotten the required information out of the way, let’s tackle a common contention against the Qur’an.

It is a well known fact that the early Qur’ans were not dotted nor were they voweled (see picture below). That means there was no way to differentiate between letters with the same skeleton (rasm), and even if dotted, there were different ways a word could be read to have a different meaning. To illustrate, the letters ت (ta) and ب (ba) have the same rasm but are different letters. Keeping this in mind, it becomes obvious that the early Qur’ans, including the Uthmani Mushaf, were extremely difficult to read- infact, impossible, unless someone knew the text beforehand.

A contention that has been raised by some Orientalist scholars such as Jeffery and Goldziher, as well as some recent polemicists such as Keith Small (though his opinions are not exactly the same), is that the variant Qira’at were generated by defects in the Uthmani script, as the reader simply sat down and read the script any way he liked provided he had some foreknowledge of the topic of the text. I believe this simply stems from an ignorance of the history and nature of the Qira’at. All the 10 mutawaatir readings are well based in historical fact. As ‘Azami had pointed out earlier, a reading is only accepted if it traces back to the Prophet through multiple channels. Zayd b. Thabit, the head of the committee compiling the Uthmani Mushaf, said “The Qira’at is a sunna that is strictly adhered to”[6]. For someone to reject this fact, they need to show that these channels are somehow defective. Nevertheless, there are more arguments that force us to concede the feebleness of this contention[7].

1. There are extremely few differences between the extant Qira’at.

The skeletal text of the Qur’an contains hundreds of thousands of possible readings, many of which fit the context well. Yet all the reciters are unanimous in reciting most ayahs exactly the same way, even though other words could be used that fit the skeleton of the text just as well. An example of this phenomenon can be found in the following table[5]: 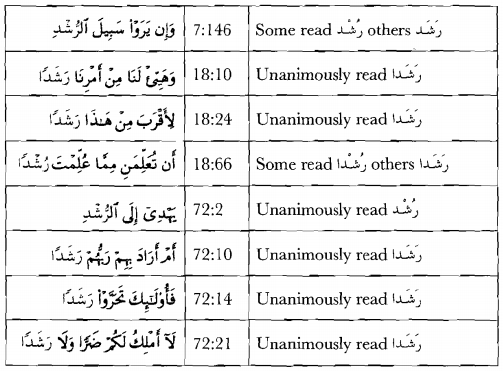 Note how in all of these cases, it could have been recited either “Rashada” or “Rushda” and both words would make sense. Yet all these reciters either recite “Rashada” for one verse, and “Rushda” for another, with only two exceptions. This is true for the majority of the Qur’an.

Why do the readings unanimously corroborate each other almost all the time? How is it possible that the number of variants are so little (the famous Qira’at scholar Ibn Mujahid counted roughly a thousand) yet so many different readings are possible? Should we not expect the variants to run into the reaching even the millions?

2. There is absolutely zero historical evidence of such a phenomenon.

If the variants of the Qur’an were simply created at the whim of the reader, why aren’t there any schools or orders or even a single book written during the literary period that tells us that the early Muslims were deciphering the Uthmani Mushaf? All Muslims have held all the mutaawatir Qira’at as valid since the time of the Prophet and the companions.

On the contrary, we have historical data (hadith and qira’at literature) that tells us exactly the opposite. Why is this being ignored?

3. The readings sometimes differ from the Mushaf of Uthman unanimously.

An example of this is that the text spells words such as As-Salaat and Az-Zakaat with a waw (و ), but all the readings do not pronounce the waw (otherwise As-Salaat and Az-Zakaat would be As-Salawt and Al-Zakawt respectively). This is a hint that people are not simply sitting down and deciphering the Mushaf as it is- they are relying on an oral tradition that already exists to shape their pronunciation of the word.

4. It is not even possible to read an undotted, unvowelled script.

Anyone with any knowledge of arabic would know this. If the contention we are refuting is true, then the reader must have memorized the ayah atleast down to the roots. But then the question arises again: why aren’t there more variants? We are back to point 1.

The evidence provided here is by no means exhaustive. However, I think it is sufficient enough to dispel the notion that the Qira’at could somehow be generated by a defective arabic script, rather than inherited by the oral tradition we already know to exist.

History of the Qur’anic Text by M.M. ‘Azami

Hunting for the Word of God by Sami Ameri

Variant Readings of the Qur’an by Ahmad Ali Al-Imam

[4] This is a part of a manuscript held by Tuebingen university. It can be accessed here. ‘

[7] Credit for these arguments primarily goes to both ‘Azami and Ameri whose books I have included in the relevant readings below.

6 thoughts on “Are the variant readings of the Qur’an caused by the lack of dots in the Uthmanic Qur’an?”

Welcome to by blog!
Join 113 other subscribers